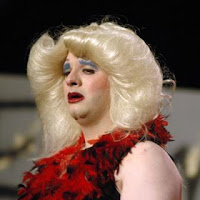 “This dress is way more comfortable than my wool uniform,” said reenactor Dwayne Ball who portrays
the driver of the Chrysler New Yorker that hit Roethlesberger

PITTSBURGH – Civil War Reenactors from the 53rd Pennsylvania Volunteer Infantry, Company D will stage a reenactment of Ben Roethlesberger’s motorcycle accident today on its first anniversary. The intersection at Second Avenue at the Armstrong Tunnel will be closed between 11 AM and 1 Pm for the event.

“The timing couldn’t be better for us,” explained reenactor Malky Rosenecker, “We have a break in our schedule between the Skirmish at Tannehill in Alabama and the Battle of Gettysburg next month.”

Unlike the original accident, which was witnessed by only a few members of Steeler Nation, the reenactment is expected to draw thousands of the Steeler faithful. The City of Pittsburgh is asking fans to park at nearby Duquesne University where the lots will be opened for tailgating at 8 AM.

“Accident” sponsor, the H. J. Heinz Company, will provide fifteen gallons of ketchup to represent the blood that Roethlesberger spilled at the intersection. The company says that the beloved condiment will be cooled to room temperature and will not be the scalding variety that is used at the Heinz Field scoreboard’s “red zone” display.

Who will portray the injured Stealer Quarterback is being kept a secret for know, but the reenactor who will play Martha Fleishman said he is “psyched.”

"I’ve always been jealous of the guy who plays Mary Todd Lincoln at our Civil War reenactments, but getting to be [Mrs. Fleishman] for a couple of hours is the real prize.”

OFFICIAL NEWS OUTLET OF THE WORLD

“One of America’s great web sites.” Brian O'Neill, Pittsburgh Post-Gazette
“The city’s equivalent of The Onion.” New York Times
“Carbolic Smoke Ball's rise to greatness is a tale as old as time -- which, according to Sarah Palin, is only about 6,000 years.” Randy Baumann, WDVE-102.5, Pittsburgh
“This stuff is better than The Onion.” Tony Norman, Pittsburgh Post-Gazette
“They’re some of the world’s funniest men, and they deserve our attention.” Rick Sebak, PBS/WQED Multimedia
“One of Pittsburgh's most popular blogs, and it's gaining a growing national audience.”
Pittsburgh Magazine
“Nothing is sacred for the guys who run Carbolic Smoke Ball. Nothing.” Pittsburgh Tribune-Review
How Carbolic started an urban legend. Snopes.com